Masters of the Track

This article first published in All the Art, Summer 2017.
View the entire publication here.

Stan Masters (1922-2005) often quipped, “I’m not from the wrong side of the tracks, I’m from between the tracks”. The son and grandson of railroad laborers, Masters was born and raised in the noisy, hardscrabble world of steel rails and creosote ties. His grandfather, Grant Masters, began working for the Missouri Pacific Railroad in the 1890s as a ‘section hand’ near Sullivan, Missouri. Railroads, which by this time spanned the Continent and stitched the coasts together, were organized into sections, each roughly 10 miles long, depending on the location. Each section had a foreman who was responsible for the maintenance of the track and the right of way. He oversaw the section hands, who in addition to keeping the tracks clear of brush and debris, performed the grueling work of replacing the worn-out 39’ tracks. Grant eventually worked his way up to section foreman and moved to Kirkwood where he lived in the section house, owned by the railroad. 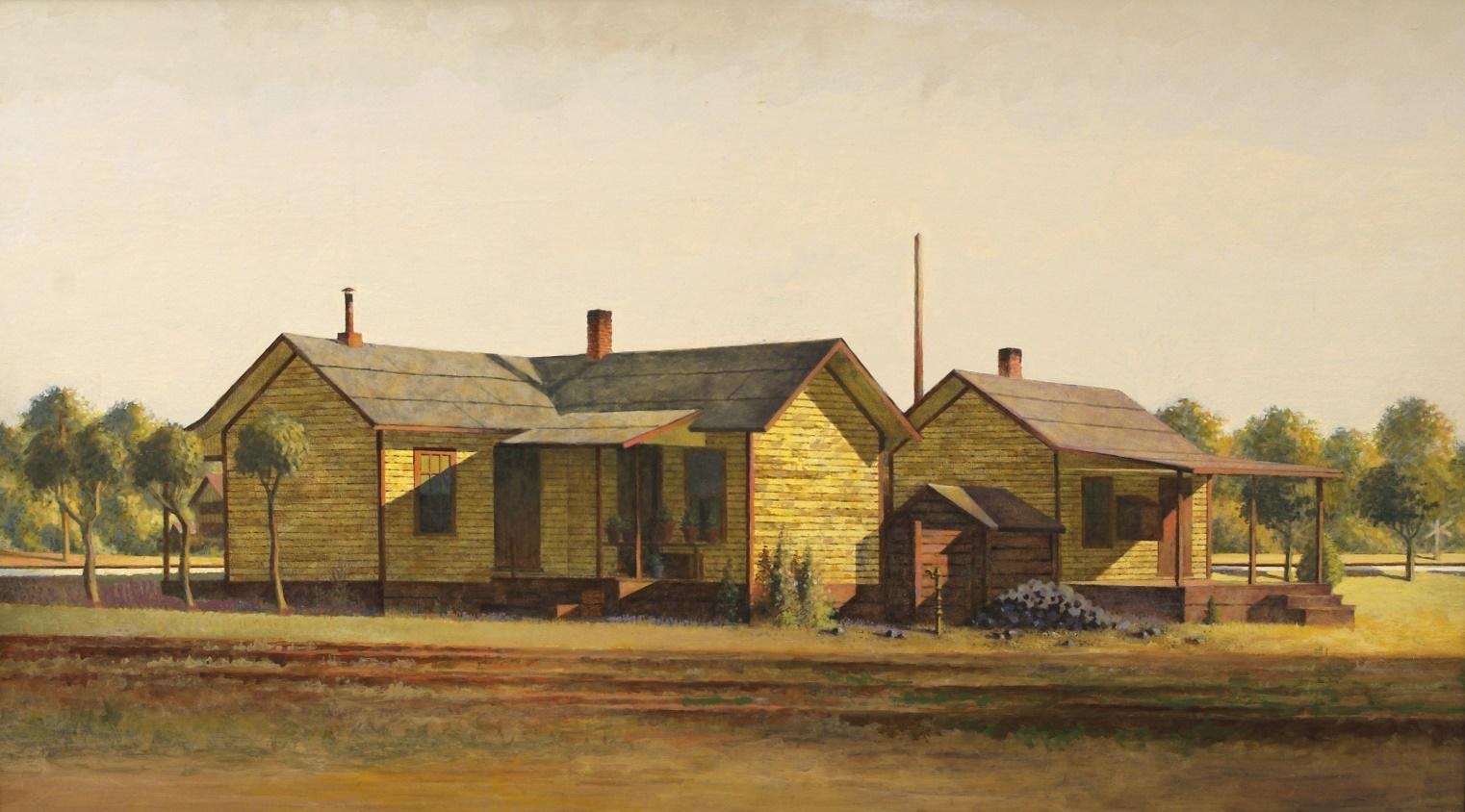 A two-room clapboard affair with a tin roof, the Kirkwood section house, located at 301 Leffingwell, just east of the Kirkwood Station, was painted Mo Pac yellow and brown. It had electricity but no running water. Behind it stood an austere 1-room bunkhouse measuring 10′ x 14′ that housed seasonal, itinerant laborers. A coal bin and water pump serviced both buildings. Situated at the confluence of three sets of tracks, one set coming within 6′ of the front porch- hence the quip- it was a dirty, noisy compound with an estimated 75-100 trains passing by every week. The squeal of the wheels must have been excruciating as the trains slowed to approach the station. Grant and Louisa had 12 children there, six of whom survived to adulthood. The oldest, John, grew up to be the angry, belligerent father of Stan. John drifted from job to job, eventually raising his family in the bunkhouse.

Stan was born on the 4th of July in 1922, the oldest of four children of John and Margurite (nee Klamberg, the daughter of a Kirkwood plasterer). Poverty was abject: Stan recalled times when all the family had to eat, was a can of soup. Once for Christmas, his aunt gave him a bar of soap. Trains are filthy beasts and Margurite was miserable trying to keep the children fed and the house clean.

Yet from an early age, Masters knew he wanted to become an artist. As a high school student, he drew a cartoon of himself as a precocious baby swaddled in diapers, holding a crayon in each hand. Standing proudly by his stick-figure masterpieces, he beams, “Someday I’m going to be a famous artist!”

Masters graduated from Kirkwood High in 1941 and entered the Army the following year to serve in WWII. Stationed in Pennsylvania to guard, you guessed it, railroads; it was here he met his future bride, Carlene Fiester. Deployed to Italy, where he was a company artist, he spent time in Rome and eventually toured St. Peter’s. A delightful letter home to his mother offers an intriguing glimpse onto the mind of the 22-year-old artist as he describes the overwhelming splendor “… for the first few minutes you just marvel with awe at the years of handwork, the perfection of design and architecture. Then you begin to feel it’s too much and too overdone. You can’t appreciate or digest so much perfect beauty all crammed into one place- there are too many centers of interest (italics added) -each of which is a masterpiece in itself, and the whole mass together is almost uncomprehensible (sic).” In language reminiscent of Samuel Clemens, he concludes, “It’s like eating too much fruitcake- a little would have been far more tasty and easily digestible”. Honorably discharged in 1946, he and Carlene married the following year. Upon his return to St. Louis, he discovered the homestead at 301 Leffingwell had been demolished.

Some 25 years later, in 1970, after a successful career in commercial art and a brief period of experimentation, Masters began his career as a watercolor artist. Working in the American Realist tradition of Winslow Homer, Edward Hopper and Andrew Wyeth, the antithesis of Baroque Rome, his narrative art tells a uniquely American story. It’s the story of America in transition, where the rural lifestyles of the past yield to the urbanization of the present, carried forward by none other than the railroad.