This article first published in All the Art, Summer 2019.
View the entire publication here.

St. Louis watercolor artist Stan Masters (1922-2005) was born into grinding poverty in Kirkwood, Missouri. After graduating from Kirkwood High and service in WWII, he spent the first half of his career in commercial art and advertising. Then, from 1971 he devoted himself entirely to watercolor until a stroke ended his career in 1995. Almost entirely self-taught and working in the American Realist tradition of Winslow Homer, Edward Hopper and Andrew Wyeth, much of his work portrays the decline and disappearance of rural America, of which Grover Texaco is a particularly fine example.

Grover, Missouri was a small rural community 25 miles west of St. Louis. It had a population of about 200 when it was absorbed into the city of Wildwood in 1995. It sat along the famous Route 66, which itself had been decommissioned just 10 years earlier. 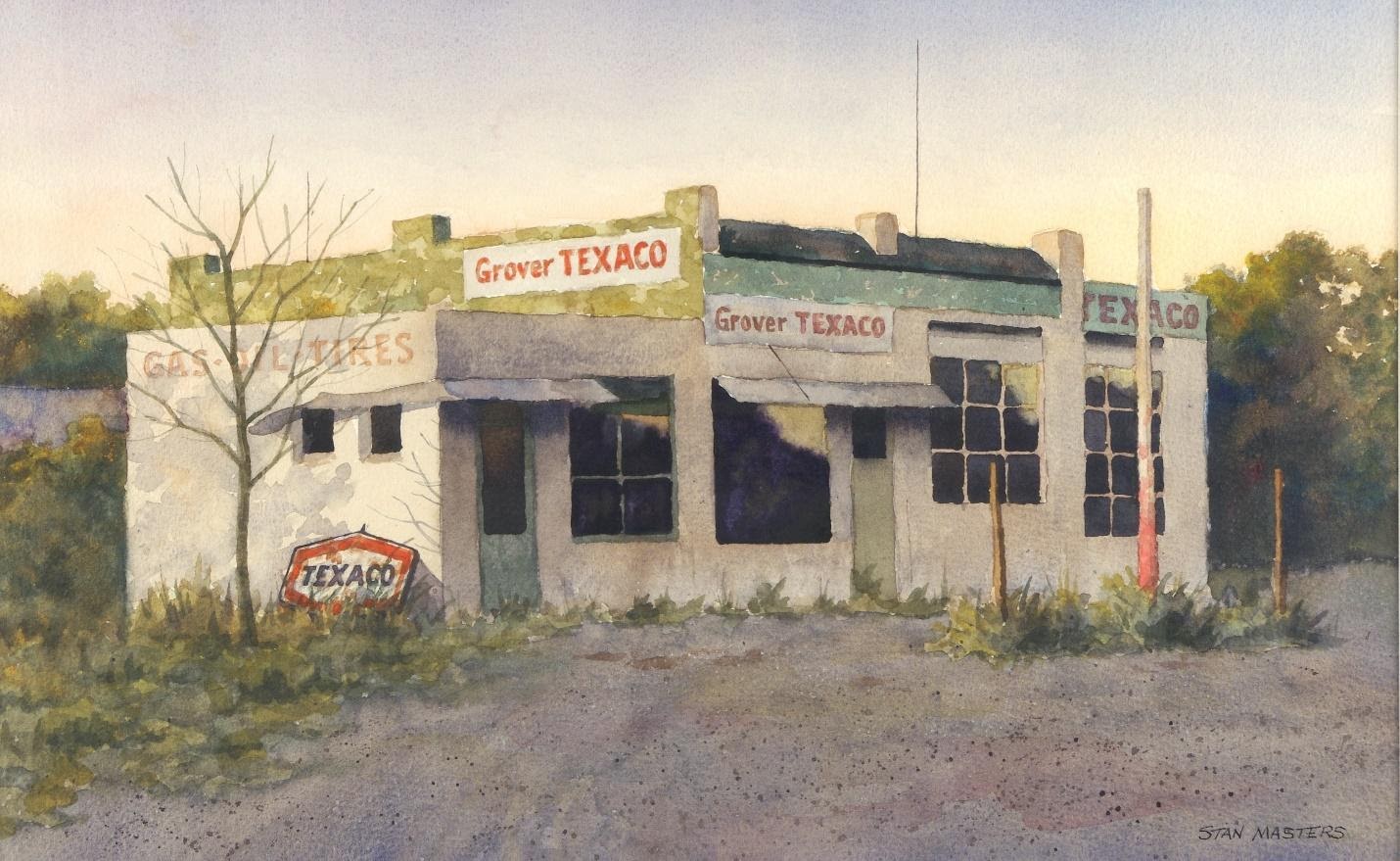 
Affectionately called the Main Street of America, Route 66 was established in 1926. Spanning 2,500 miles from Chicago to Los Angeles, it passed through eight states and countless other small towns. It became a popular highway for tourists headed west, as well as an important artery for Interstate trucking. During WWII it grew in national importance as a major conduit to move men and materiel across the country. Its decline began in 1956 when President Eisenhower signed the Interstate Highway Act, establishing the Interstate Highway System we see today. By the mid-1960s most of Route 66 has been absorbed into the new highway system. Those parts which weren’t absorbed were bypassed and it was finally decommissioned in 1985.

Thus, Masters paints the vacant Grover Texaco station. A nevertheless pleasant, utilitarian building, the uniform width of the piers gives it structure, while the complex arrangement of the doors and windows between provide interest and variety. The crenellations relieve an otherwise monotonous roof line as the signs guide the eye smoothly around the building. Starting with the Texaco sign, the eye moves up the wall to the “Gas Oil Tires” panel. From there it undulates across the top until it meets the support post, where the rust draws it back to the ground. Masters subtly completes the circuit with the horizontal line suggested by the three posts, leading the eye back across the page.

The detached sign serves many functions. It is our immediate clue that the station is permanently closed (the notion confirmed by the absence of pumps). Its placement against the bright, sun dappled wall, framed by the tree and windows, confirms its importance. Ingeniously, Masters positioned it at one end of the building and its pole at the other, inviting us to mentally restore it to its original position. In doing so we move diagonally across the façade, passing in front of the darkened doors and windows, reconfirming the narrative and further engaging us with the painting.

The awnings, modest as they are, provide a welcoming reminder that service was personal and friendly. The attendants, probably dressed in uniforms, cleaned your windshield and checked your oil. For decades, they served the needs of locals and tourists from this unassuming building. But the sun has set on the Grover Texaco, as it has on the leafless tree. Yet, the grounds remain clean and tidy, unsullied by litter and debris. In this quiet, orderly painting, Masters brilliantly fulfills his Artist’s Statement, which reads, in part, “I am striving to provide you with a pleasurable escape, perhaps remind you of something forgotten and most certainly, convey a sense of beauty.”